Thanks so much for your prayers for us. The past few months have been different for us as we are now caring for Lois’ parents in their home in WV. Lois isn’t traveling with me, and I miss having her at churches where I minister. She struggles keeping up with the paperwork end of things (and that’s why this update looks different and is late). We know we are ministering in a different way and don’t regret it, but we miss our ‘normal’. 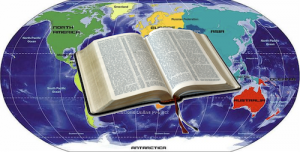 I get interesting feedback when I talk about “How the Bible changed the World.” I try to answer the question of why Western cultures have more freedoms and prosperity than others.

The short answer is: “The closer a person or nation follows a biblical worldview, the more likely they are to have peace and prosperity.” The problem is that other cultures are trying to function on a faulty made-up view of reality. This talk contrasts Biblical thinking with Hinduism, Islam, Animism, Medieval Catholicism, and secular Humanism, and shows that each one is a recipe for a dysfunctional culture.

I find that the people who respond the best to this talk are those who are from another culture or those who have lived outside of our culture. Just last week a young lady from Argentina said that she understood exactly what I was saying. They didn’t have a Protestant Reformation to show them a contrasting Biblical way of thinking. This young lady from Argentina said that her culture never developed a protestant work ethic where doing a good job is praiseworthy. In her culture, she said it is the goal to try to do as little as possible and still get paid for it. This is one example of how one way of thinking can mean the difference between a productive culture and an impoverished one. 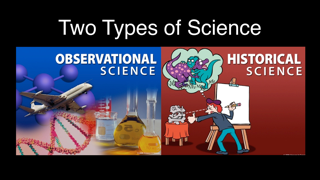 The trouble is people often mix them together, and say “see science says we can’t believe the Bible”.  I was having a talk with my doctor the other day about what I do and he was typically confused about science, being convinced that science and the Bible are incompatible. A quick explanation of the two types of science seemed to clear things up.

My wife was playing one of my talks for her father who was in a rehab center recovering from surgery. The man in the next bed was listening intently. He said that idea of two types of science really cleared things up for him. This idea is so liberating for those who think we have to go with what modern scientists think happened, so we can’t believe what God said actually happened. The point is, the Word of God is Truth; we don’t have to be timid or ashamed about it at all.

Your financial and prayer support helps us to continue carrying this message to churches, camps, and schools almost every week of the year. You can view our schedule at creationshope.org.